Australia or "Straya", how the real Australian calls it, is awesome.

So awesome that I didn't even think about posting. Mostly because it doesn't feel like travelling, it feels like home. A lot. As many of you feared already, yes, I might not come back. But the last word is not spoken yet, to be honest, the last word might be spoken soon by the visa office.

So what is it, what makes Aussieland so livable?

First of all: it is the mixture. Every traveller knows this feeling of coming home to the every day life after travelling. What a bummer. All the relaxation fades away within minutes. People are grumpy again and the weather is bad. Somehow Australia pretty much holds the balance. Yes, we have bad weather in Melbourne. And yes, I am SO caught in the working life. But I also spend some fair amount of time upside down in the parc, go on roadtrips and meditate in my room. Somehow the stress of the everyday life don't get to me so fast here. Might be still Nepal's impact but I rather think, it is Straya's laid-back-lifestyle. It feels like travelling home.
But what exactly is different?

General vibes.
When you enter the bus, you say "hello" to the bus driver, when you get off, you thank him.
Same in the supermarket. I regularly have 5-15 minutes chats about my day with the cashier. I don't know if Australia simply has the better customer service (I don't think so) or if peopel are just generally friendlier and opener here.

Nature.
Even if it's just the backyard of a house. Walking through different suburbs in Australia is amazing!

Wild growing plants and flowers and I don't even wanna start talking abut roadtripping and the beautiful nature everywhere (can't wait to go to Tasmania!)

- Shorten it up! In Straya, people are so relaxed that most words don't find their way to their ends. BBQ is Barbie, Football is Footie, Good day is G'day, Brisbane is Brizzie and so on. Why making the effort if everyone understands it with one syllable? ;) I honestly love that. The slang here reminds me a bit of nordish German. Never realized how much of an impact a relaxed accent can have on the every day life.

Palmtrees in the backyard.
I don't have to explain that, do I? 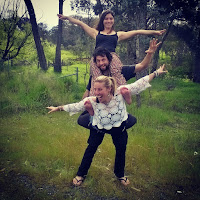 Free souls everywhere.
Might be Melbourne (the most livable city 4 times in a row...) but even in other places of Autralia I find people more open to everything. Maybe because so many people travel to Australia so there's always a mix of nationalities. But that's not different to Berlin and in Berlin I got so annoyed from the dogmatism. The so called hippies and hipsters here are so real. They are vegan or queer because they've decided so, not because it's a trend (I'm aware that I'll have 80% of all Berliners agains me by the end of this section but this was my personal impression.). I personally didn't feel good in Berlin the last years because it was all so hip and if someone had a different opinion in anything, there was a lot af aggression towards this person.

Which is paradox because Berlin is known for being alternative. But somehow alternative became mainstream and everyone who wasn't alternative enough to be mainstream was out. Here in Australia I've had the most enlighened conversations and discussions, mostly with the same content as in Berlin but not with agression but rather passion and understanding. So much easier to exchange opinions here and learn from each other. Something I really appreciate and what shows me, those people here really believe in what they do. They don't have to fight for it, they are just happy if they can share their passion with others and this is exactly what opens others up to listen. Again, this was a personal experience, I'm sure neither Berlin nor Melbourne are all black and white.
Another thing about the free souls is the art. This is similar to Berlin btw. Melbourne and Berlin in gerneral are quite similar. Art everywhere, new types of movements, like acroyoga and contact improvisation, streetart, festivals, selfmade and DIY (Do it Yourself). And mostly all for free. Volunteers teach sport in the parc or paint the streets in colours. Free and inspiring. I feel SO inspired here to make and do stuff, amazing (but to be fair this could be Melbourne-typical rather than Australia-typical).

we are social!
Might also be a Melbourne rather than Australia thing (if I think about the differences from Sydney's Acroyogis to Melbourne's Acro Yogis: rad acrobats against some cuddle puddle and wasching machines it might definetly be a Melbourne thing..) but Melbourne definetly is. Even the trees here wear knitted pollovers and the veggis in the supermarket are free for kids. I will have a proper post about the lovely sharing Melbourne but for here just being mentioned: Lentils as Anything (pay as you feel), so many free events thanks to volunteers, so many beautiful ideas and projects.

So many prejudices are true here. The beach always seems closer even though it might be the same distance (or even farer away). Everyone lives or have lived in a van. Honestly. In my close neighborhood I see at least one van every day (usually more) with coloured curtains and someone sleeping or eating in it. Australians have BBQ for Christmas and everyone loves roadtrips.
But of course, there are down parts too (down parts in down under har har har). The immigration office for example does obviously not want me in their country. Post will come about this as well. The weather is freaking warm (Melbourne is okay but still.. Working in 36 degrees is a pain in the ass and YES, the sun IS more dangerous here...). If someone cries "Spider!" you better have a look, because it will most likely kill you. And it's so far! Everything here is far, especially Europe-home! No spontaneous Christmas visit, a trip must be planned for ages.

However, I love it here. And I'm really sad to say goodbye to Melbourne soon, as it is time for me to move on and do my farmwork to be able to stay in the country for at least another year. And then I have to find someone to marry me ;) Kidding, Heaps of plans but they will revealed by the time we get there :)

So for now, I soon say goodbye to a wonderful home after a lovely Christmas (fire, dancing, acro, dumming on the beach followed by lunch and poolparty) and an even lovlier birthday (love love love, massages, music, acro, food and more love) to prepare my time in Tasmania (or wherever) and leave for new adventures...